← back to
Terrible Records
Get fresh music recommendations delivered to your inbox every Friday.
We've updated our Terms of Use. You can review the changes here. 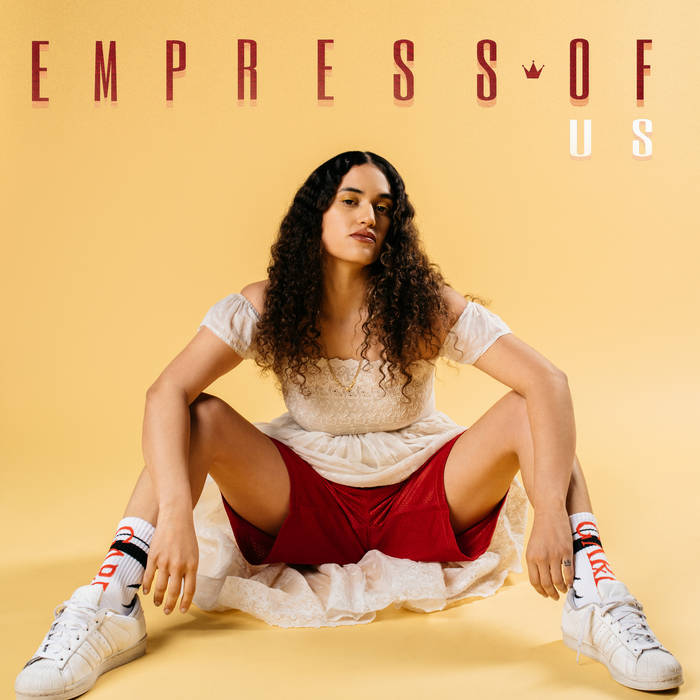 Anatole Gomersall At the moment it seems to fit my mood, thank you for this sweet and impeccable collection of beautiful stories. I hope more will come? Merci beaucoup ! Favorite track: Timberlands.

Alasdair Duncan Really smart lyrics on these short, catchy songs. Half of them are lodged in my brain right now. Favorite track: Everything to Me.

Flor Serna frankly a masterpiece Favorite track: When I'm With Him.

Bugsy Rabot this is i think an album many ppl didnt know was needed in 2018, but oh it was. pure pop brilliance! Favorite track: When I'm With Him.

Luke Wilson I’ve been obsessed with Lorely’s music for years now, but this whole album is a masterpiece she hasn’t reached before, and I can’t wait to see where she goes from here. “Timberlands” will go down as my personal YAWP for 2018. Favorite track: Timberlands.

Lorely Rodriguez, the artist known as Empress Of, recorded her new album, Us, all over Southern California. Topanga Canyon. Ojai. At a recording studio “with no windows.” At her home in Highland Park. At another recording studio “with a really loud cricket.” “He was there, like, all month,” she says, “And I was trying to track vocal tracks and he’d be like, CHIRP, CHIRP!”

It was the first time she tried to record music this way—sequestered, for a month at a time, in between touring and performing, alone but for the company of a cricket. She would later invite collaborators—Dev Hynes (aka Blood Orange), LA production duo Sam Griesemer and Jerome Potter of DJDS, Spanish electronic producer Pional—but the resulting project remains a showcase of Rodriguez’ skill both as a lyricist and a producer, though she is wont to admit it. The artist is modest about her skills as a instrumentalist (“Lorely plays every instrument half-assed,” she says, “Put that in the bio.”) and coy about her process as a writer (“I don’t write out chords for my songs. Everything is intuitive in production. I don’t have one piece of sheet music for my songs.”)

She estimates that she’s produced about 75 percent of this album, which serves as the real testament to her dynamism as a musician, since she won’t testify to it herself. She’s frustrated with a media preoccupation on her jazz music education, but only because she believes her experiences singing to Céline Dion and Mariah Carey in the living room of her childhood home in Southern California are far more formative. When pressed about her influences, she lists her mother.

Empress Of’s debut album Me was released almost three years ago, in 2015. As the name suggests, it presented a deeply personal exploration of her emotional world. So personal, she says, it was difficult to perform. “It was, like, every day, just giving myself to the audience,” she says. With Us, Rodriguez wanted to facilitate a more equal exchange of energy between herself and her listeners, to create a “community.” “It’s not just love songs. It’s about different experiences of the heart,” she says. “I want it to be like a mirror, and [the audience] sees a little bit of themselves in every song.”